The Slender Man is a mysterious and all-powerful being, as well as the central figure of the Slender Man Mythos. He appears as an unusually tall, faceless man who wears a business suit and tie. It is generally accepted that he is a malevolent entity, whose targets for murder include children, amongst others. The Slender Man's abilities and motives remain largely undefined and are seemingly incomprehensible.

The Slender Man was first mentioned in 2009 in the Something Awful forums' Create Paranormal Images thread. Victor Surge posted the first known images of the Slender Man, describing him as a tall, faceless man that steals away children. The Slender Man proved highly popular, with various other posters adding their own Slender Man-related images and stories. Several aspects of these stories became central to later Slender Man legends, including mention of him murdering hikers and hanging garbage bags containing their organs from trees as well as the entity having some sort of relation to Germany.

The Slender Man was later connected with the story of Der Großmann ("The Great Man"), a bogeyman that had supposedly been sighted in Germany's Black Forest as early as the sixteenth century. Der Ritter ("The Knight"), a sixteenth century woodcut attributed to Hans Freckenberg, which featured a knight duelling an armored creature with multiple limbs, was also connected to the Slender Man legend. Many early 1900s photographs featuring the Slender Man and stories of unexplained fires and disappearances were also brought to light, which were set in various places around the world. Slender Man sightings have since been traced as far back as ancient Egypt.

Various theories for the Slender Man's origins have been thought up since the tall man's introduction into popular culture. One popular theory is that the Slender Man is a tulpa, a lifeform brought into existance from the collective thoughts of many individuals, who then wrote himself into history. Soon after the Slender Man's new-found popularity began, theories centering around the "tulpa effect" became somewhat common. A variant of this, known as core theory, became popular in various blogs centered around the Slender Man, but was later seemingly debunked.

In 1958, the Princeton Experiment, performed by a former Nazi scientist now working for the United States government, attempted to create a Rift connecting our 3rd World to the 4th World, in an attempt to call forth a Gorr'Rylaehotep (an ancient Egyptian god). The experiment eventually proved successful and a Rift was opened, prompting the Slender Man to slaughter all who were present except for one man. It is unclear whether the Slender Man truly emerged from the Rift on that day, and if so, whether it emerged for the first time or can come and go as it pleases. It is believed by some that the Slender Man is a god from the 4th World, capable of transporting others to said paradise and granting them godhood as well.

The Slender Man is typically depicted as an unnaturally tall man (anywhere from six to nine or more feet tall) with a white, featureless face. He wears a business suit and white undershirt, along with a tie (generally either black or red in color). At times, the Slender Man has been shown to wear black gloves or have hands which match the tone of his face in color. Although his face is often seen as featureless, close analysis of the Slender Man's face reveals that he has two empty indents where a human's eyes would usually be. The Slender Man has been depicted in art as wearing other outfits in the past, such as a knight's armor or an outift reminiscent of a Pharoah's.

The Slender Man's abilities remain largely undefined, although their are certain traits and powers he has been observed displayed on numerous occasions. Amongst his most well known abilities, the Slender Man is able to form black, tentacle-like appendages, which emerge from his back. He has been known to use these appendages to grab others or even use them as extra limbs for transportation. These appendages have been described by a reliable source as cracks in space and time. As his height varies from sighting to sighting, the Slender Man is seemingly also capable of changing his physical form.

Technology is also affected by the presence of the Slender Man. Cameras, as other modern digital devices, have been known to undergo various forms of audio and visual distortion while in his presence. This effect also occurs in the presence of those who have had contact with the Slender Man, even while he is seemingly not present. This distortion has been attributed to radiation by numerous sources. James Corenthal discovered that the Slender Man gave off what is known as "Sigma Radiation", which is seemingly somewhat contagious. Other sources have offered the explanation that the Slender Man gives off electro-magnetic radiation as a result of his exposure to the Rift upon entering our world. The same source explains that, while the radiation is highly contagious, it has a relatively quick half-life.

Only on rare occasions is the Slender Man seen traditionally walking. Instead, he typically disappears and reappears in another location while nobody is watching him, although he has been known to transport himself in a similar way on camera at times. Some refer to the process by which the Slender Man travels without visible movement as "Slenderwalking". There have also been instances in which others have travalled through space and time as a result of the Slender Man's interfearance. Examples of this phenomenon include individuals walking through a door and emerging in an incorrect location or being sent back to an earlier point in time, sometimes having full knowledge of what they had done during the no longer nexistant span of time.

Those exposed to the Slender Man's presence for long periods of time often begin experiencing symptoms of illness, such as frequent coughing or internal bleeding. In addition to physical symptoms, this can also have an effect on an individual's mental state. The Slender Man has been known to cause insanity in humans and at times, even purposely alter their minds, seemingly for the sake of furthering his own undefined goals. Those who serve the Slender Man, either out of choice or due to some level of mind control, are referred to as proxies. Alternate terms include "indoctrinated" and "hallowed". The Slender Man is also capable of altering an individual's dreams. His presence can also have an effect on animals, with many being discomforted by the tall man or even turning unusually violent. The Slender Man making direct physical contact with a human's skin appears to cause somewhat severe burns, which leave seemingly permanent markings, as well as damage to the individual's sanity. The Slender Man is also capable of removing said burn marks and restoring one's sanity.

In addition to the Slender Man seemingly controlling time and space at will, they can also be affected by his presence. When the Slender Man moves through time and space, it can lead to Dimensional Bleeding, a phenomenon in which alternate universes "bleed" together, usually over the internet. A large amount of Dimensional Bleeding ocurring in a specific area can cause the creation of a Rift, a sort of portal connecting alternate universes together, which can be manipulated by certain entities for travel through time and space.

The Slender Man is most well-known for his relationship with children. He is known to kidnap, or possibly even kill, children and taken them to an unknown location where they are never found. In some cases, children view the Slender Man as a benevolent being and willingly choose to follow him into a secluded location, such as a forest. With the possible exception of children, the Slender Man typically does not choose his targets at random. Those who the Slender Man stalks for long periods of time usually serve a greater purpose and do not end up being murdered without cause. Those who get between the Slender Man and his chosen targets, however, are often killed quickly. The bodies of those killed by the Slender Man are often discovered in pieces, hanging from tree branches in garbage bags.

Psychological torture seems to be the Slender Man's preferred method of harm. He often appears in the distance at first and gradually makes his presence known, which sometimes culminates in a direct confrontation. Rarely does he resort to using physical violence, although he is fully capable of repelling those who attack him and using his tentacle-like appendages as weapons. Trying to assault the Slender Man is futiles; assaulting him with a physical weapon only results in injury and bullets have proven ineffective against him. Attempting to run him over has also resulted in failure, as he is capable of transporting the approaching car and its passengers away or simply stopping the vehicle from moving. It has been implied that a means of harming the Slender Man is written in a Nazi journal, which is currently in the possession of Karl Maxwell.

Despite his usual malevolence, there are those who the Slender Man seemingly wishes to protect. He has spared Jeff, Vinny, and Evan of EverymanHYBRID from harm on multiple occasions and seemingly even saved Jeff from another entity. The Slender Man has also accepted human proxies as followers and apparently given some of them specific directives. Whereas some humans' attempts to serve the Slender Man have resulted in death, such as in the case of the Order, others have become his servants while largely retaining their free will, although even these proxies seem unable to truly comprehend him. Only very specific individuals, who are usually non-human, have a true, working knowledge of the Slender Man and his goals.

Those who can be considered on the same level as the Slender Man are almost nonexistant. HABIT has seemed unfazed by the Slender Man, although it is known that the two entities worked together in some capacity in the past. The Rake seemingly also exists outside of the Slender Man's jurisdiction, although it has been known to flee at the sight of him. The Slender Man also has other non-human entities as allies and followers. An example of this is the Collective, a group of beings who reside in an alternate dimension and serve the Slender Man directly.

Slender Man in 'Not dead yet'. 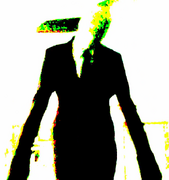